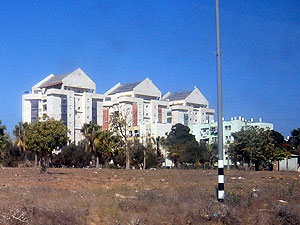 Hadera is located a few kilometers from the coast, halfway between Tel Aviv and Haifa.

One third of the population of the city are immigrants from the CIS countries who came during the last aliyah in the early 90s.

Hadera was founded by members of the organization "Hovevei Zion" in 1891. They began by draining the marshes. In the early years, many died of malaria.

In 1895, Edmond James de Rothschild allocated funds for draining the marshes on the site of the settlement and for planting eucalyptus groves.

In 1982, a power plant was built in the city. In Hadera there is a large industrial zone.

The hospital "Hillel Yaffe" is located in the city.

City streets and attractions near the city:

City streets and attractions near the city:

Israeli Settlements in Judea and Samaria

Religious Cities and Villages of Israel

Distances between Cities and Villages

The Health Care System in Israel

Hospitals and Medical Centers in Israel

Cities and Villages of Israel

Traveling in the Holy Land

The Antiquities of the Land of Israel